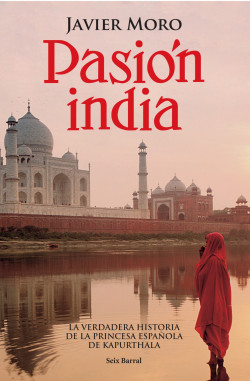 On January 28th 1908, a young Spanish woman, sitting astride a luxuriously bejeweled elephant enters a small city in the north of India. The streets are packed with the curious locals, anxious to pay homage to their new princess with a skin as white as the snows of the Himalayas. This sounds like a fairy tale, but it is, in fact, the beginning of the true story of the wedding of Anita Delgado to the wealthy maharaja of Kapurthala; a grand story of love and betrayal that took place during almost two decades in the heart of an India that was on the point of disappearing forever.
After carrying out research in Europe and India, Javier Moro —author of Senderos de Libertad, El pie de Jaipur, Las montañas de Buda and co-author of Era medianoche en Bhopal— reveals, in fascinating detail, the story of this extraordinary relationship that caused one of the biggest scandals of the India of the Raj. Pasión India transports us to the fabulous world of the maharajas, with their harems straight out of the 1001 Nights, their bacchanalian orgies, their passion for jewels, for palaces, flamenco music, horses, Rolls Royces and tiger hunts. According to the author, «If in the end I opted to write a novel, it wasn’t due to the need to invent anything. On the contrary, it was the only possible way to tell this unbelievable story and to properly reflect the extraordinary atmosphere of the time… the colours and smells of India, the prodigious extravagances of the last maharajas and the magnetic personality of Anita Delgado, who remained faithful to her feelings, against all the odds, until she finally managed to achieve her own freedom.»