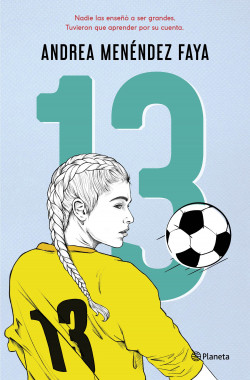 Since she was a girl, Raquel has always dreamed of playing professional soccer, and she remembers perfectly the day her mother signed her up for it. She was the goalie. Her mother doubted her, but only for a few seconds; she then became her great ally, her defender, her rock. Thanks to her mother’s effort and unbreakable faith and her own perseverance and character, Raquel, at nineteen, has achieved her dream, and is a professional goalie. But how many people were there with the same dream who didn’t make it?

One day, Raquel gets a worried letter from a mother whose daughter dreams of playing soccer and is getting bullied at school. The mother writes to her, Raquel, and not to Casillas or Ter Stegen, because she is the one the girl looks up to. As her trainer Fran says: “The game has changed. You are examples. You don’t see it, you don’t know it, because it’s happening inside you, but little by little, you’re becoming what you dreamed of being.”

This letter awakens many emotions in Raquel. Should she call the girl, encourage her, tell her how hard it was to make it to where she is? The road wasn’t easy. How is it possible that even today, there’s a stigma around girls wanting to play soccer? Raquel never would have made it without all the women who fought to play before her, to belong to a professional league and be respected as athletes.

No one taught them to be great. They had to learn on their own.