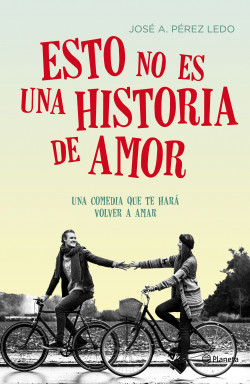 This Isn't a Love Story

A comedy that will restore your faith in love. A romantic comedy in nineties Hollywood style.

Dani, a 35 year old only child, believes that romantic love is a Hollywood invention. A lie that for years has been creating unrealistic expectations in people who spend their lives searching for the crescendo of violins under a starry sky.

And while he awaits inspiration for a story worthy of becoming a first novel. He earns his living writing biographies of businessmen on the cusp of retirement. He is contracted by companies who want to give a parting gift to directors who are about to leave.

That is how he meets Eva, the daughter of a property magnate estranged from her father and his fortune, who works as a kindergarten teacher in the suburbs. He immediately falls in love.

Thus our anti-hero is thrust into the kind of story he doesn’t believe in: his life becomes transformed into a romantic comedy that will see him punctiliously and consciously act out every single cliché of the genre.

But as often happens in love stories, this one will be cut short. Dani then endures a genuine – and very funny – period of emotional trauma that will only end after going through the stages of grief and plunging fully into misery, achieving a mental state some might describe as maturity – or not.

An amusing parody of romantic comedies that ends up becoming one.

Funny and absorbing... a very well written and plotted book.

A novel about maturity, identity and, especially, love.